Death of an Underground Writer 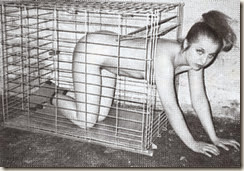 I just received word yesterday about the death of underground writer and artist Lisa B. Falour. She was famed as “Bikini Girl” of the 1980’s. Later was a member of the Underground Literary Alliance in its heyday. Lisa had problems with a small press publisher taking advantage of her. Changing her work without her permission and not paying her. One of the ULA’s successes was obtaining a payment from said publisher for her, after some lobbying. I’d been invited several times to visit her and her husband in Paris, but never raised the money or time off for such a journey.

Lisa’s work defined edgy writing. By all accounts she was an edgy personality. RIP, Lisa.

Sad to hear it. I knew her as Lisa Baumgardner in the 70s; I remember once having a wonderful lunch with her in Greenwich Village. She was very smart and talented and an extremely nice person.

I feared this happened. Do you know the circumstances of her death?

I feared this happened. Do you know the circumstances of her death?

She was one of my favorite posters I enjoyed her visits to all the interesting places of Europe. She got out a bit more in the last year. She will be missed online so sad we don't have some system for when we expire? I would not know of her passing if I did not search for her.

I heard that she died at home in her sleep of complications of longterm illness.

For the last 1/2 dozen years I was a neighbour & confidant/pal to Lisa. So it came as no surprise that I should be the first to discover her reposed form...SO angelic in appearance!
May God have mercy on her soul...and any other sinners if so there be.

I had a good correspondence with her about 2 years ago and we exchanged a lot of emails. She was very intelligent I just remembered I was used to seeing her videos and something came over me to check her out because I haven't heard from her in so long. I was very shocked to see she died. I know she was ill, but I thought she got better. So sad. I will always remember and I loved her videos. God Bless Shalom Denise

Ahhhh, dear Lisa. I wonder if she realized how much she was admired by so many of us who didn't judge her. Bless her .. yes, she will be missed. Bon voyage my friend. I'll see you .. thanks for the memories.

I just learned of Lisa's passing today. Working with her as one of the many contributors to Bikini Girl Magazine was one of my favorite experiences. But I am profoundly sad. Everything seemed to be harder for Lisa and as we exchanged correspondence and later emails over the years, I felt my job was to be a good, sympathetic listener. What more could you do?