Story openings only, 200 words max. Post your opening at:

The much heralded First Official Pop Lit Story Opening Contest will begin next week, at
www.americanpoplit.blogspot.com

The contest will start as soon as I post the official announcement at American Pop Lit. Writers can then immediately post their best Opening. The idea might be to be at or near the top of the line, though some strategists may disagree with this.

I have a few details to work out. I can mention now that there will be prizes for the three winners. There will be a scoring system. I hope to have a few judges, for fairness. The maximum length allowed to an entry will be 200 words-- and I will be counting! Those entries which exceed the limit will be disqualified in red letters.

Stay posted to this site for more news.
Posted by King Wenclas at 8:14 AM No comments:

I just heard a phenomenal song called "Love and War," by a band named Rilo Kiley. Classic punk rock sound with the best lyrics I've ever heard, at least this side of Patti Smith. Is there hope for pop music after all?

Now, if I could ever find a young writer who can write stories with that kind of kick and passion. . . .
Posted by King Wenclas at 8:45 AM No comments:

Yes, I’m staging a writing contest. All will be welcome to participate. Unlike many writing contests, the process will be open—you’ll be able to read each of the entries as they come in. How is this possible? The wonders of blogs.

Watch for details at www.americanpoplit.blogspot.com

GIVEN that literary aristocrats right now in their cluelessness are holding contests about revolution—500 words max (yeah, you can get a lot that’s relevant into that!)—I’ve begun a 10,000 word story/novel on the theme of revolution. The tale will take place within a large American city on the east coast. It will have several diverse characters, fast pace, and great scope. It’s focus won’t be inward, as in most of today’s lit fiction, but will offer a stepped-back point of view. The characters’ thoughts and motivations will be expressed through dialogue and action. They’ll be conveyed through the setting itself. (The first third of the story will be posted someplace within a couple weeks.)

The conclusion of "The Big Boy Saga," aka "Fake Face versus Big Boy," is up at
www.americanpoplit.blogspot.com
Posted by King Wenclas at 8:28 AM No comments:

Do questions of hegemony and rebellion exist in the abstract? Are they disconnected from the actual world?
A new book by Daniel Rasmussen, American Uprising, published by HarperCollins, is receiving major attention from the New York-centered media world. The work is a history of a violent slave rebellion in Louisiana 200 years ago. To promote the book, Rasmussen and Pen Tales (http://pentales.com) are running a writing contest on the theme of revolt.

THE AUTHOR
Daniel Rasmussen is one of the most fortunate young writers in America. He attended St. Albans in Washington D.C., possibly the most elite prep school in the nation. Its graduates include politicians Al Gore and Evan Bayh, former Washington Post CEO Bo Jones and former Washington Post Chairman Donald Graham, news host Brit Hume, and Neil Bush, son and brother of former Presidents.
After St. Albans, Rasmussen attended Harvard, considered the most exclusive and prestigious university on the planet.

THE BOOK
Rasmussen's academic thesis about the Louisiana slave rebellion was designated for publication while he was still a student at Harvard. The publisher, HarperCollins, is a giant company owned by the gigantic Murdoch media empire. HarperCollins targeted the book for wide release and backed it with substantial promotion.
American Uprising has been reviewed by NPR, Harvard Magazine, the Diane Rehm Show, the Washington Post, the Financial Times, the Toronto Star, and many other outlets. The book has been blurbed by Harvard alum Evan Thomas, reviewed by Harvard alum Alan Goodheart in the New York Times Book Review, and reviewed in the Wall Street Journal by current Harvard history professor John Stauffer. Rasmussen was Stauffer's student at Harvard. He's defended Stauffer in obscure online historical debates. They're apparently close. What role did John Stauffer play in shepherding Daniel Rasmussen's book through the publishing process?

PEN TALES
Pen Tales is a trendy jet set literary salon whose Co-Creator, Harvard grad Stephanie Ursula Hodges, is a friend of Rasmussen's. The Pen Tales contest, at http://pentales.com/private/page/5mUM/18711-- a glorified ad for the book-- asks for stories that express "the wild spirit of man in rebellion" and the dreams of "complete and total revolt."
This is as curious as Rasmussen's interest in rebellion, given that Pen Tales is backed by Big Money in the person of Richard McGuire, whose bio at Pen Tales reads:
"Richard 'Mick' Mcguire is the Founder and Managing Member of Marcato Capital Management, a value investor in the public markets. Prior to forming Marcato, McGuire was a Partner at Pershing Square Capital Management and also served as the non-executive Chairman of the Board of Borders Group, Inc. McGuire has spent his entire career in private and public equity investing and holds an M.B.A. from Harvard Business School and a B.A. in economics from Princeton University."
Borders Group, incidentally, means the book chain, which McGuire became Chairman of at age 32. Pershing Square, a hedge fund, is the largest single investor in Borders.

REVOLT
Who will Pen Tales, McGuire, and Rasmussen revolt against? Themselves?

WASHINGTON D.C.
The recent film, "Waiting for Superman," covers the struggle to improve the deplorable condition of D.C. public schools.
Have things in America changed very much in in 200 years?
It can be argued that the gap between rich and poor in this country-- between Daniel Rasmussen when he attended St. Albans and the typical inner city public school student-- is as great as in Antebellum Louisiana. Slaves in 1811 were discouraged from learning to read and write. Today the educational system in cities like Washington D.C. achieves, wittingly or unwittingly, the same end.
In 2005 I worked as a substitute teacher in the city of Philadelphia. An uncertified sub, I was sent to schools that other substitutes chose not to enter. I can testify to the barriers to learning in such environments. Survival for teacher and student alike is the primary goal. The large inner city high schools are inhuman warehouses. The dropout rate in cities like Philly hovers near 50%. (In some cities, like Detroit, it's much worse.) Many who do graduate are functionally illiterate. In many high schools, a mere handful of students take the SAT exam, much less go on to receive a college education-- let alone at a place like Harvard.
Have conditions changed very much in 200 years?
Daniel Rasmussen's status as one of the elite of the elite is akin, in a relative sense, to the status of the plantation owners he writes about.
Rasmussen stands at the top of society's pyramid. The very top! It's not enough. He takes possession of the story of 1811's underclass and collects the benefits. Plaudits! Accolades! Awards! The Best Seller List!
Have the divides in America since 1811 changed very much?

PUBLISHING CULTURE
The book's success is an example of how the cultural establishment mobilizes and uses its resources. For the chosen author and the designated book, the entire machine is geared up. Ample number of copies are put into chain bookstores, timed with all the publicity the tottering print media and its online auxiliaries can accomplish. The result is inclusion on the vaunted New York Times best seller list. With so much backing, the surprise would be if the book didn't make the list.
The classic example of the Machine at work is last year's hype for the forgettable Jonathan Franzen novel, Freedom. Time Magazine covers and Oprah TV appearances; stacks of books readied in the big stores; a bandwagon effect created among the Machine's legions of acolytes. The work itself is an afterthought. Is the book any good? Does it matter?
The book is an excuse to put the Machine to work.
Despite the progress of DIY and print-on-demand, there's still no level playing field for writers in this country. Far from it. In Daniel Rasmussen's case the tilting has been particularly favorable, starting with his tilted educational opportunities, the mentoring he received, and the support of established writers and established institutions of culture.
There's nothing intrinsically wrong with this. Is there? It's the way things are. It's how society has been ordered. There's the Elect at the top and the masses below. The irony is that Rasmussen writes about extreme privilege in another time, while failing to notice his own.
How much has changed in 200 years?
Welcome to America now.

State of the Underground

In what condition is the literary underground? Could the pieces ever be put back into place? Or has it been atomized into oblivion?
Posted by King Wenclas at 8:48 AM No comments:

Aristocrats Put Own Heads on Block! 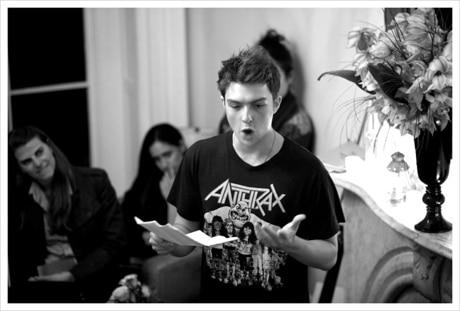 There will be a more in-depth report on this matter appearing here or elsewhere next week. Watch for it! In the meantime, info about the Pen Tales request, part of a half-sham writing contest being used to hype a book, can be found at