AS I’VE LIVED much of my life in Detroit, and had it drummed into my head over and over that change is inevitable, I’m sensitive to economic change elsewhere in the world—particularly the inability to recognize or acknowledge drastic change.

It was with this mindset that I jumped briefly into a discussion at the widely-read literary blog The Millions. The topic of the thread, “Practical Art: On Teaching the Business of Creative Writing,” was the idea of introducing business questions into the structure of creative programs. What I found interesting in the initial post by Nick Ripatrazone, and subsequent comments, is that no one acknowledged the proverbial elephant in the room. (See the post here—you’ll have to scroll down to reach my remarks: http://www.themillions.com/2014/08/practical-art-on-teaching-the-business-of-creative-writing.html)

My comments were aggressive, but not extreme by any means. They were written with clarity and intelligence. What I found interesting in the responses was that no one addressed my point about the uncompetitiveness of the book publishing giants. One respondent finessed the issue, saying it would be a shame if the big publishers went under. Well, maybe, but that’s not the point. The point is that change in the publishing realm IS happening. It does a disservice to students in writing programs not to mention this. Students should be given all the options available to them.

Neither was I advocating excluding the big publishers from the marketplace, or from the world of literary ideas. That’s scarcely an option. I’m sure some of them will survive, in retrenched form. Like most bureaucracies—the Detroit automakers a notable example—they likely won’t change until reality comes crashing down upon them; when they can willfully ignore reality no longer.

Neither would I want to exclude literary writers from literature—though I’d suggest they learn to tweak their writing, to make it more competitive in a changing world. My co-editor at www.newpoplit.com, Andrea Nolen, and myself want to walk a middle path between the two extremes of literary and popular writing. We’ve stated again and again that the short story should be able to be both. (However, to suggest that Nobel Prize-winning short story writer Alice Munro, with her lengthy paragraphs and endless descriptions of trifles, her turtle’s pace, is readable and pop is absurd.) NEW POP LIT is designed to offer an alternative to both camps. I went on The Millions site to get word out to MFA/status quo writers who otherwise wouldn’t consider amending their art, to write what we call The New New.

After the reasonable comments of “Hot Ossuary” came a predictable demi-puppet attack by someone named “Toad.” A classic case of cognitive dissonance. I have no doubt that Toad read my remarks as he described them. It’s a condition of the human animal that when encountering sudden contrary ideas, the average person will at first see only red—the mind distorts the message, reading the words emotionally, instead of seeing what’s actually there. Toad ends up making me look moderate!

I suspect that within five years even Toad, as well as the blog he appears on (and for?) will be open to DIY ebook writing. In the face of reality, all bandwagons and their followers eventually change course.
Posted by King Wenclas at 8:10 AM 4 comments:

A Cat and a Ballerina?

Take a minute to read this short short and vote on it!

Posted by King Wenclas at 10:32 AM No comments:

Is the Phanatic Leaving Philadelphia? 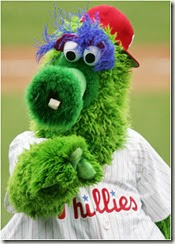 The notion of the Phillie Phanatic leaving Philadelphia has been the subject of conversation since the spring. See this article:

The idea interests me, since my new project, NEW POP LIT—which I’m producing with writer/blogger Andrea Nolen as well as the Friends and Enemies of Pop Literature—needs a mascot!

If the Phillie Phanatic is truly available, searching for a better deal, we’d like to make him an offer. Maybe some classic Detroit–style Coney Dogs and the opportunity to watch, um, a better baseball team. (And by now he must be tired of cheesesteaks.)

Of course, since the Phanatic is a native of the Galapagos Islands, there’s the question of possible travel restrictions on his visa.

Posted by King Wenclas at 6:12 PM No comments:

‘HOW A STORY FAILS” BY LANCE MANION

One of the features of the New Pop Lit website will be “Rate-This-Story” as part of our Interactive page, which is located in a side room of the New Pop Lit “Coffeehouse.” First up is short story writer Lance Manion with his “how a story fails.” What is this guy talking about? Click on the link and see.

(Scroll down for more Interactivity.)

Kudos to NPL co-editor Andrea Nolen for the striking look she’s achieved—and mucho thanks to Mr. Manion for courageously contributing his story!

(This week’s NPL Feature Story coincidentally is also about a writer: “Harry Pinker Does It Again” by Corey Mesler. It’s also something of a short detective story. We are, after all, a pop lit site.)

Posted by King Wenclas at 10:16 AM No comments:

Posted by King Wenclas at 5:17 AM No comments:

We're finding good writers but we want more of them!

(Take our poll at http://newpoplitinteractive.wordpress.com/2014/08/05/pop-or-literary/)

Posted by King Wenclas at 2:19 PM No comments:

WHAT is that appearing on the horizon, in the distance but moving steadily closer? Is it ISIS? Omar Sharif in “Lawrence of Arabia?” Are they good guys or bad guys? Do they carry destruction or renewal?

It’s NEW POP LIT! Launch date is in four days. Time to get on board as a writer, artist, reader or game participant. (Yes, we will have an interaction section.) What should the New New in literature look like? Will it lean more toward the literary or pop? Can we rescue the short story from its doldrums, and thereby reinvigorate literature as a whole?

Please answer the current question at our Coffeehouse feature: “Does NEW POP LIT Need a Mascot?” Do we? If so, what should it look like?

Also, please take our poll, “Pop or Literary?” placed directly beneath the mascot post. Both can be accessed here:

We have one must as a new literary site: That everyone have fun.

Posted by King Wenclas at 9:02 AM No comments:

Probably as a reaction to the unparalleled horrors of a world gone berserk, the post-World War II generation had a passionate commitment to art. Especially to the beauty of art, as shown in these clips from the 1948 film THE RED SHOES. Note the color and emotion—it’s likely the most beautiful movie ever made.

Note the attitude of the young people in the story toward the ideal of art—real art.

The question is whether members of the millennial generation can approximate this ideal; this commitment. As co-editor of a new literary web site I’ll settle for a handful of them—writers and artists willing to break all bounds to create the otherworldly. Ultimate art which exceeds expectations, which reaches deep into the human soul.

A crazy but necessary goal.

Posted by King Wenclas at 6:24 PM No comments:

For a new project, NEW POP LIT, we’re receiving a number of submissions which fit into two categories:

1.) Masses of run-on verbiage. The ex-zinester syndrome. Much of it is good, but needs to be put into a structure.

2.) Writers with too much structure. Everything is given from one viewpoint, fitting into a narrow, solipsistic world. The writers and their stories take no risks.

We want explosive writing, but we want it to be tightly compressed, jammed into the confines of a plot, which will make the writing all the more powerful.

We want structure, but we want the writing within that structure not to be careful and timid.

Our goal is to reinvent the short story art.

Posted by King Wenclas at 8:45 AM No comments: