The Octopus by Frank Norris

(Here’s the text of a short review I posted today at Goodreads of the 1901 Frank Norris classic, The Octopus. I could say much more about the novel—have elsewhere, and possibly will do so at this blog.)

Not just a great American novel-- this book is THE great American novel, in its scope, its understanding of the American character and of the forces which have shaped the American civilization. The leading figures of the narrative, on both sides of the dispute, are risk-takers. Most of them are quite ruthless-- Presley the poet and Vanamee the mystic the chief exceptions. It's Frank Norris's genius that he makes us care about a man like Annixter despite his hardness and ruthlessness. Annixter and the other members of the League become heroic because they stand up for their work, their land and their principles, against what turn out to be irresistible forces.

I see that some reviewers have a problem getting past Norris's style of writing. His "purple prose." Frank Norris was a naturalist and wrote in that mode-- which means the narrative is heavily detailed. It means that the author makes his points again and again-- he hammers them into you-- which is admittedly a different style from what most readers today are used to, but it also gives the book its unusual power. When conflict comes, it has reverberations beyond the incidents themselves, because Norris makes the conflicts part of his larger themes.

Norris overstates his descriptions because he wants the reader to SEE the setting and the characters; really see them. Few novels are so closely tied to the land and nature. (Tolstoy's Anna Karenina comes to mind.) No novel I've read has so well conveyed the special qualities of California; its landscape and sunlit beauty. Norris emphasizes the wheat as a force of nature because he wants us to see the railroad, and the people of the novel, as natural forces as well.

For all the care Norris put into the novel's construction, few novels carry as much excitement. The shooting at the barn dance; the chase of Dyke; and finally, the sudden showdown between ranchers and railroad men are as tense and exciting-- and ultimately as tragic-- as any scenes ever written.

Scope, power, love, tragedy, compassion, meaning-- no American novel puts every aspect of a great novel together as well as this one. Indeed, it remains topical, in that monopolies, corruption, and cronyism are with us today-- and there remain people who fight against these forces, whether their vehicle to do so be the Tea Party or Occupy. Since 1901, when The Octopus was first published, has all that much really changed?

Posted by King Wenclas at 6:48 PM No comments: 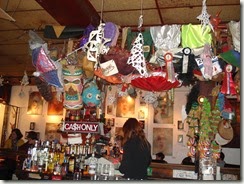 Yes, I’m still around, still writing. Still In Detroit—despite a recent visit to the City of Brotherly Love.

I’ve been busy setting up the appearance of NEW POP LIT at the big Allied Media Conference in Detroit June 19-21. We may even debut the print version of our publication there, if all goes well. The journal will include fantastic work from amazing writers and artists.

Posted by King Wenclas at 10:49 AM No comments: