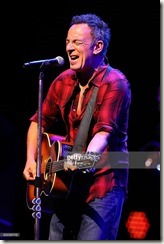 Bruce Springsteen has made a career out of being a self-appointed spokesman for the American working class. The wealthier he becomes, the harder he works on the part—as if prodded by a fear of being out of touch; losing his authenticity, his connection to reality. This is similar to certain trendy novelists (Stephen King; George Saunders; Mary Gaitskill; Joyce Carol Oates). The more they’re captives of the conglomerate publishing system, the more determined they are to prove their activist credentials. They “care.”

Once, the pop singer was a modestly-paid performer, putting on a tuxedo to perform in a nightclub. Today, Bruce Springsteen is a corporation unto himself, employing an army of musicians, agents, producers, accountants, roadies and bodyguards. When on tour, the show travels from city to city in a caravan of loaded tractor-trailers, like a Broadway production. Think Springsteen the Industry.

Picture Bruce by a swimming pool, wearing an expensive silk robe. He sighs. The people call. Time to do a concert. More millions of dollars to generate. He takes his costume from a walk-in closet larger than many homes. No tuxedo for the “Boss.” Instead, the grimy sweatband; the faded jeans and ripped t-shirt. The Bruce Springsteen Minstrel Show; adopting the garb of the dispossessed, like affluent author Barbara Ehrenreich putting on a waitress costume. It’s not Al Jolson on bended knee singing about “Mammy,” but in its own way it’s as distasteful.

The farther removed in time Springsteen becomes from his humbler days, the more with that humble lifestyle he becomes identified.

The liberal media love it! Writer for The Nation Eric Alterman has stated he’s seen over 200 Bruce Springsteen concerts. Tickets aren’t cheap. Alterman has spent a significant amount of money assuring himself that, like Bruce, he cares about downtrodden people. His message is ultimately the same as Springsteen’s. “I’m one of the good people.” In its modest way, The Nation is as much a part of celebrity culture as People magazine.

Is there safety to the Springsteen presentation, because of its lack of immediacy? Springsteen, after all, is not going to call for the confiscation of lavish estates. He’s not about to begin working in a gas station or a factory. Supporting him, indulging in his make-believe, is a harmless outlet which allows many of America’s most successful social-climbing individuals to enjoy their success yet clear their conscience and retain their self respect.

There are many variations of the Springsteen Paradox. Take a rock musician on the other end of the ideological spectrum, Ted Nugent. “The Nuge” could buy a chain of supermarkets loaded with steaks, yet, for all the world to hear and see, affirms his need to hunt game in the wild to feed his family. Man, life is a struggle for survival! (Just ask his accountant.)

Nugent collects ever more weapons and pumps more iron, training for war. In the Sixties, when Vietnam was a real possibility for him, his patriotic belligerency was, needless to say, significantly tamer.

It’s all about an instinctive need for authenticity. These performers sense their poses are fake. The more they suspect this, the harder they have to work to keep away the truth—from themselves.