What have I been up to the past months?

For one thing, helping to develop the "3-D" multidimensional short story. One has been released here: 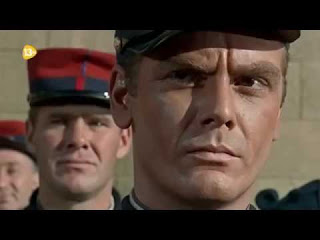 RECENTLY I made a post at the New Pop Lit NEWS blog about multi-dimensional thinking. (Read it here.) We at NPL intend to soon apply these ideas to art.

IN SO DOING, we've been scouring through a host of obscure stories, novels, and movies searching for elusive examples of the point we're trying to make.

Among the more obscure works we've found is the 1966 remake of Beau Geste, written and directed by pulp novelist Douglas Heyes.

Yes, the film is cheap, melodramatically acted, and scantly true to its original source. BUT, its structure consists of some fairly imaginative thinking.

The setting: an isolated fort of the French Foreign Legion in North Africa. A patrol approaches the fort. All they see: a wall, with smoke coming from behind it. A member of the patrol fires a rifle in the air. In return: shots, from the fort. Then they hear more shots.

A survivor is found inside the fort. He takes the story back to the beginning-- and the narrative progresses to the present. The scenes from the opening of the movie are replayed, but, simultaneous to the approach of the patrol, we see what happens inside the fort. Behind the wall.

Why is this important? Because the movie asks the question we ask of a person, and of events, in fiction and in life: What's behind the wall? WHAT is the full story? Then the movie answers the question. Simple, but basic. A template upon which to build similar ideas.

A mark, by the way, of the movie's obscurity is that only eleven reviews of it are posted at the popular IMDB website.

Posted by King Wenclas at 11:31 AM No comments: