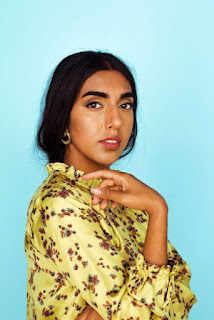 (I penned this to the same college student, this time in response to questions about the Instapoetry movement. Apparently he uses excerpts-- with attribution-- in a college newspaper.)


Change in any art is necessary to keep it fresh and alive. What's happening with the success of Rupi Kaur and others like her is a return to extreme simplicity in form, and to simple, basic emotion. To language's roots, in a sense. The poems are fresh and readable, and so are drawing readers to online poetry. The short, clear style is made for the digital age-- at least, as you imply, for these still-early days of the digital age. So, yes, Rupi Kaur is the face of poetry now.

Can it last? I don't think so, unless it evolves. It's too simple, and will quickly become monotonous. What looks new and fresh today won't look so fresh a few years from now when it's been done over and over. And over, with little variety. Its utter simplicity leaves little room for variety. It's the kind of poetry (I won't call it verse; it's not verse) which anyone can write. Which means everyone will write it, and the world will be flooded with Rupi Kaur knockoffs until we're drowning in them and people cry out, "Enough!" Are Rupi Kaur and her colleagues talented enough to evolve their art? Or are they one-hit wonders who'll be writing and reciting the same tunes ten or twenty years from now? They have a penchant for promotion. That's obvious. Is that enough?

Their flaw is they use none of the effective tricks of poetry developed over centuries. Things like cadence, wordplay, the occasional (or not so occasional) rhyme. What some call euphony. Rupi Kaur stresses that her work draws on trauma and abuse. So did Sylvia Plath's. Plath's poems were extremely self-centered-- but they also used every tool in the poet's toolbox, which is why they've lasted-- why they're as strong now to read or listen to as when they were composed.

The poetic art has fled from craft-- from the instinctive use of what some call craft-- since Plath's death, and much of the running away is from simple laziness. Academic poetry has put people to sleep for decades-- in part because it threw away rhyme and meter, elements of poetry which existed for a reason. Which existed because they helped the listener connect easily to the work-- aiding the mind in flowing into a work's rhythms and imagery. The best poetry expresses a joy in language itself-- which is why Shakespeare has lasted. It should be fun and exciting to recite. The work of the Instapoets is too simple to be fun and exciting to recite.

Still, what they're doing might be necessary to bring new people back to the art. The true innovators will be those who move strongly beyond Rupi Kaur and her peers-- who can build on the simplicity but give the new audiences the excitement of a more complex and passionate art. That's the trick. That's the task. That's the accomplishment to go after-- not to dismiss Instapoetry, but to surpass it. To top it at its own game by subtly and gently bringing back those long-scorned and forgotten tools of cadence and rhyme. Mixing them into the simple words and short works. Keeping the poems short but making them more powerful, more compressed. Creating poems which will simply engage the online reader-- but knock those readers out of their chairs with their power. That's what I'd like to see. If it can be imagined, it can be accomplished.