Maybe not, but it’s a good one. See our discussion on the short story at the New Pop Lit Interactive blog here.

The trick of course isn’t to talk of revamping the story but to do it. We sparked the discussion as a way to introduce a collection of writing—which includes stories that in various ways point toward the new. The reinvention of the short story form is beginning to happen. Organic, natural, intentional—does it matter? What matters is the result. 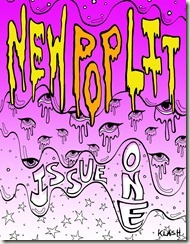 Posted by King Wenclas at 4:51 PM No comments:

Why has NEW POP LIT published surfer girl Jess Mize’s short story “Valentine's Day”? Beyond the reasons given in our Intro (), we want to push the short story form beyond the genteel bounds within which it’s been trapped.

The notion of 1% versus 99% is misleading. A PR gimmick. A theory which fits the need of affluent Leftists to identify themselves with “the people.”

The real divisions in America are more like this:

Top 20%: well-educated and comfortable. Call them the Affluent. Or, Aristocrats.

After them come a 40% who could be called Strivers. Those who seek to be in the top level. “Middle class,” or really, middle-class wannabes, consciously or instinctively trying to live “The American Dream.”

The remaining 40% are the underclass. Many are people of color, but there’s a huge white element as well.

This bottom 40% is seldom depicted in literature, and when it is, almost never in an accurate way. Sorry folks, but Ray Carver-style “K-Mart Realism” was always a stripped-down sham, full of lethargic, inarticulate zombies who could barely mumble, much less speak.

In her story “Valentine’s Day” jess Mize gives voice to that underclass. The story takes for granted the infidelities, vulgarities, and violences of those who in crude hyper-Zola fashion try to find skewed versions of love at the same time they’re trying to survive.

Am I rationalizing why we accepted the story? Maybe. It’s clearly NOT written by Alice Munro, or even Mary Gaitskill. The art of those writers has seen its day. The Jess Mize story isn’t genteel, and its rough edges haven’t been sanded away.

Regarding the short story, at the NEW POP LIT Interactive blog we ask the question, “Should the contemporary short story be radically revamped in order to reach a broader audience?”

We wouldn’t have asked the question if we didn’t have answers for it, in the form of stories unlike those which exist today. We want to provide the shock of change. We seek writers who haven’t had mental barriers thrown around their minds signaling what they’re allowed or not allowed to say. Universities right now with their indoctrinations and speech codes are the worst possible training ground for creative writers. In addition to their restrictive give-no-offense outlook, there’s their institutional complacency. An attitude which says, “all is fine”; no need to change anything.

(A few of the answers we’ve received reflect that mindset—or even show hysteria at the very notion of change.)

All is NOT okay with the short story today. It reaches relatively few people in this society, when it should reach everybody.

We are going to produce short stories which reach everybody. The Jess Mize story “Valentine’s Day” is a first strike. A deliberate punch in the face. A rock thrown through a gray pane of glass. Ms. Mize will only get better as a writer, as long as she doesn’t lose the strength and freedom of her voice.

My co-editor, Detroit-area writer Kathleen Crane, has written a story which more fully fits our guidelines. The story’s attributes are simplicity and compassion. It’ll be ready in a few weeks. Watch for it! Then tell us whether or not the short story can be better; whether or not it can be consciously changed.

Posted by King Wenclas at 7:50 AM No comments: