About the Intelligentsia Part II

A.) That which you actually say. The argument you make.

B.) More important, to how they react, is whether you agree or disagree with them. As simple as that.

Whether or not they pay attention to A, depends on B.

If you don’t agree with them, it’s a personal affront. More, it’s an attack on the intellect itself.

The world of the intelligentsia is not an unbiased, coldly objective forum, as advertised. Instead it’s run, controlled, and protected through primal codes of the herd.

Uncoding “The Wizard of Oz” 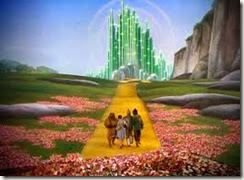 With the appearance of the Imax 3-D version of the 1939 classic movie The Wizard of Oz in theaters, I’ve written a review of the experience, but also added thoughts about what the various symbols contained therein, such as the ruby slippers, could mean. Here:

This is part of my foray into writing about movies—along with my new ebook, ABOUT WESTERN MOVIES, affordably available at Kindle or Nook. Buy it!

Posted by King Wenclas at 6:45 PM No comments:

About the Intelligentsia Part I

Just as no established literary persons, or writers of any kind, dared publicly debate the Underground Literary Alliance after we destroyed the Paris Review staff at CBGB’s in New York City, February 2001—so not one of the many thousands of wonderful status quo writers, critics, and literary persons will to this day contest myself and my ideas anywhere, at any time, in any forum.

Has an art throughout history ever been so congealed with a mass of unquestioning conformity? Contrary opinions not only aren’t allowed. The possibility of their very existence is not considered. Writing academies produce waves upon waves of writers, throwing them upon the culture-at-large, yet you’ll look in vain for any who’ll dare disagree with the accepted gods and ways of doing things. It’s a prescription for obsolescence. The public still reads—mass market junk produced without thought. But said public has no longer any concept of American literature. Literature, in that sense, no longer exists—except on the rare occasion when the monopolistic media marketing machine can present an Insider writer like Jonathan Franzen AS IF he’s one more of the mass market crowd. His works frankly are mediocre enough to get away with it.

Nowhere are there any advances in the art. Nowhere are new ideas tried, or wanted. There’s an “avant-garde,” but it’s an avant-garde mimicking in every way, every sentence (but absent the radical intent) of avant-gardes of ages past. Of 100 years ago, really. Which means, not an avant-garde at all.

No advances are wanted, no criticism, no tests, no aesthetic combats. All is frozen. Sclerotic. Impregnable, but at the same time at any moment able to collapse, like the corrupt and complacent French empire of a Louis Napoleon, bolstering its arrogance on the glories of sixty years past.

I note that a frenzied and feverish literary intellect like Joyce Carol Oates, for instance—who’s been frenzied and feverish since 1960, and whose work and mentality haven’t budged one microcentimeter since then—is still taken seriously by following generations of well-indoctrinated literary scribblers. Not just taken seriously, but lauded, though her “ideas” and violently confused works could sustain no serious scrutiny, and never could, beyond some early short stories since then endlessly, year after year, reproduced with slight variations. The standing of Ms. Oates being one example of the refusal of new writers to artistically challenge the received artistic gods. Countless other examples could be given—but while other examples of the staleness of the art might surpass Oates in willful and obstinate mediocrity (see Franzen again), they’ve lasted not nearly so long.

Here I stand like a lonely knight, my flag planted, still waiting for the contest which will never come, while the vast armies of stasis, innumerable in their glittering yet cheap pot-metal armor—but not very confident—continue to keep their far distance from where my sword and flag stand planted as continuous challenge in the ground.

Posted by King Wenclas at 8:13 PM No comments:

Edited From My Ebook

Here are a few passages I took out of my most recent ebook, ABOUT WESTERN MOVIES, because I didn’t want to beat my theme into the ground:

“Violence in art can be tragic and cathartic. When there’s too much of it, it merely benumbs. Today, in a real hopeless West—our depraved imaginative culture—maniac murderers shoot up movie theaters in Colorado. The minds of movie audiences have already been shot up. The violence now is simply jumping from the screen into the actual world.”

“Violence alone isn’t realism. The world is not all darkness.”

Pick up my ebook, new-style film criticism, ABOUT WESTERN MOVIES, for a mere 99 cents at Nook or Kindle.

Posted by King Wenclas at 7:00 PM No comments:

Has anyone fully processed what happened viz-a-viz the United States, Russia, and Syria, this past week?

Has Vladimir Putin advanced that far on the p.r./diplomacy front, reinventing those fields—or is our government of Kerry, Obama and Company that spectacularly incompetent? It’s a week that will be studied by diplomatic historians and propaganda experts for decades to come.

Our preconceptions have been turned on their head. Tactics of the Cold War have been reversed. Starting with the Edward Snowden incident, Putin has become the man of intelligence, fair play, and peace. He’s done to the United States what the U.S. did to the Soviet Union. Namely, win the public relations battle. Putin seems to have learned well, adopting our skills, while we’ve regressed.

Here’s a look at Ms. Martin on a recent story, in an RT feature “Breaking the Set.” Click on the video. It’s very slick, with Abby Martin firmly on the side of the underdog:

Say what you will about Putin, but he’s doing something right, while our corrupt system is dependent not on the kind of talent and strategic skill ex-KGB man Putin exhibits, but on same-old same-old Ivy League mediocrities whose qualifications for promotion are an unquestioning willingness to be indoctrinated by a status quo ideological system and an unswaying ability to conform. (Even when not from the Ivy League, apparatchiks’ mendacity and ability to stretch the truth is noteworthy—as shown for example by cheap propagandist Tom Bissell, among many others.)

That President Obama and John Kerry—as well as previous President George W. Bush—are all Ivy Leaguers is not evidence against my thesis!

Posted by King Wenclas at 5:56 PM No comments:

(A companion post to this one at American Pop Lit: http://www.americanpoplit.blogspot.com/2013/09/order-and-chaos.html)

One reason why I believe in the existence of God/a Creator is because I can’t conceive how order can be imposed upon the chaos of the universe without an intelligence behind it.

It’s the feeling I had upon finishing Thomas Carlyle’s masterwork, The French Revolution. The collected intelligences of men of the Age of Reason, who made a god of reason, produced from their efforts violence, chaos, and terror. The disorder didn’t end until a unitary intelligence, in the person of Napoleon, imposed order upon French society via cannon fire.

In my own experience, I know that the Underground Literary Alliance failed because it tried to run itself via group consensus, instead of unitary leadership.

Democracy is fine once the universe—or nation or movement—has been created. Creating the universe, putting it on a solid foundation, without an overarching intelligence seems an impossible feat.

Posted by King Wenclas at 7:43 PM No comments:

On my American Pop Lit blog I’ve been looking at what I call “Best Ensemble Movies.” Here’s my look at one of them, 1959’s Anatomy of a Murder.

Posted by King Wenclas at 7:32 AM No comments:

The latest scare story making the rounds on the Internet is the contention that the oceans are acidifying “at the fastest rate in 300 million years.”

This is the kind of thing it takes only a moment of thought to wonder about. Not 30 years—which no doubt has been measured. Not 300 years, which might be questionable, but okay. No. The promoters of this one go all the way. 300 MILLION years! Ohmygod! Help!

The public today is so braindead unquestioning about media hype that many of them accept this on face value. Needless to say, we have no real way of knowing what was happening 300 million years ago. Or 30 million years ago, for that matter. It’s all guess work—but enough to set a mass movement upon, and hold colorful demonstrations in unthinking places like San Francisco filled with the need-to-believe heal the planet mob.

Not that they’ll change anything about their San Fran lifestyles. It’s gesture politics to make them feel good—in the same way that lobbing a few missiles at Syria is a gesture intended to make us—or someone—feel good. We—he—did something. Now let’s continue what we were otherwise doing.

The elite flagship newspaper The New York Times is getting more bizarre in pursuing some kind of crazy agenda which seems intent on dividing this country.

Case in point: This article by John Eligon which appeared on the front page of Friday’s Times. The article is about a white racist found in North Dakota, plying his trade in a metropolis of 24 people!

How hard did the New York Times and John Eligon have to look to find the guy? Yes, the individual is misguided; what he’s doing is terrible. But: the front page? Really?

What’s the point? What exactly are you trying to prove? Don’t you realize that the net result of such mainstream media bombardments of every example found of existing racism is to further divide this country? To further alienate the races?

I’m a native of the troubled city of Detroit and have seen the result of distrust between blacks and whites—what it leads to. As I’m back living in this city, whose hope is dependent on racial cooperation, I can only say to the New York Times and other agenda-following elite media outlets: Stop. Please.
Posted by King Wenclas at 3:00 PM No comments: