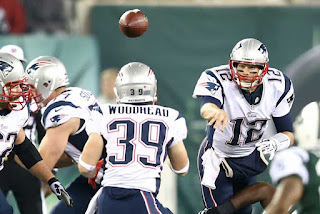 No, it's not the violent hitting. Fans could better watch boxing, MMA-- or hockey-- for that.

The National Football League is the Number One watched sport in America by far for two main reasons.

The sport is start and stop but once it starts it becomes amazing bursts of speed and energy, either backs carrying the ball running at unreal speed across the field dodging tacklers while so doing, or the football rocketed from the hand of the quarterback like a laser-guided missile. The United States is a nation-- an economy-- built on precision and efficiency. No sport reflects this better than American-style football. (A metaphor also for the precision of the modern battlefield? Probably.)

Because of the complexities of its schemes and strategies, American-style football appeals to the analytical mind. The left side, if you will, of right-brain left-brain dichotomy. Nerdy (for athletes) TV analysts-- usually middling former players such as Dan Orlovsky and Emmanuel Acho who got by due to their understanding of the game-- spend countless hours breaking down every fine detail of why this team was successful and that one was not. Intellectuals assessing a made-up game, but no less intellectual for all that, with appeal to the intellect of fans every bit as much as the game's sensory aspects of speed, color, and movement appeal to them.

Are there lessons here for those involved in the literary game?