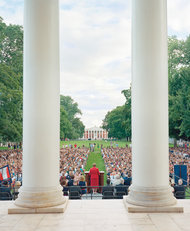 I don't know how well you can see this photo. It was taken by Harf Zimmermann, and appeared as a full page in the 9/16/12 New York Times Magazine as part of an article by Andrew Rice, "How Not to Fire a President." The photo, as far as I know, has been little remarked upon by the liberal readers of the New York Times. It shows incoming freshmen students at the elite University of Virginia. Among many white students, and a substantial number of Asians, I count five, or possibly six, African-Americans. This, in one of the top schools of the south. Whatever the liberal education system is doing to bridge the enormous divides in this nation, those steps are clearly failing.

What we have here is a snapshot of the future liberal intelligentsia-- which, as we can see, is as racially isolated as any group or institution in the country. According to studies by Charles Murray and others, the intellectual community is as isolated by class as race.

Here's an interesting quote from Andrew Rice in the same article about the same university, about "a letter signed by about 450 faculty members. It complained that, after years without raises, Virginia's faculty salaries-- around $141,000 for full professors-- were lagging far behind competitors'. 'What was once worry about getting through economic hard times is now crystallizing into hopelessness, cynicism, resentment and anger,' the letter stated, demanding 'urgent and immediate action.'" This description by Rice is not intended to be comical.