All About Chuck Berry 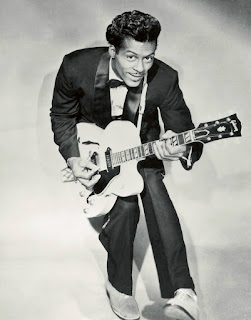 (This post is the second of three posts. The first, "Cultural Appropriation: The Harvard Viewpoint" is yet to be written. The third is here.)

THIS BLOG THREAD is an examination of Briahna Joy Gray's 9/6/2017 essay for Current Affairs magazine, "The Question of Cultural Appropriation."

*******
ONE OF THE KEY POINTS Gray makes in her essay is about rock n' roll pioneer Chuck Berry, using him as an example of an artist overlooked while Elvis Presley was given the spotlight. To bolster her argument she quotes Kenan Malik:

The quote is a distortion at best. At worst, a falsehood. While Chuck Berry's life was by no means easy-- he went to prison as a young man-- his ascent as a recording artist went fairly quickly.

During his audition with Chess Records, his first recording session, he recorded a cover ("appropriation") of the 1938 Bob Wills country-western record "Ida Ray." According to wikipedia, Leonard Chess asked Berry to alter the lyrics and change the name to something less countrified-- Maybellene. 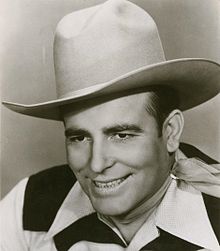 The wiki entry for the song states:

"It has been asserted that it was a common practice in the 1950s to alter the instrumental parts and lyrics of old songs and represent them as new songs . . . This practice took place because copyrights on older recordings were rarely asserted."

Recorded May 21, 1955, "Maybellene," Chuck Berry's first record, "--was a major hit with both black and white audiences," selling a million copies and reaching #10 on the pop charts, #1 on the rhythm and blues chart.

How could this happen?? While radio stations, then as now, had formats for which Berry's record wouldn't fit (as with Presley's records), an increasing number of "white radio stations" were playing rhythm and blues, and its newborn cousin, rock n roll.

At the same time that several country performers were playing rhythm and blues, and adapting the songs to their own style-- Bill Haley first among them-- Chuck Berry was playing country songs and adapting them to his style. Also adapting his style and voice to sound more "white," eager from the beginning to appeal to the broadest possible audience.

The rockabilly singer Carl Perkins, who toured with Chuck Berry, noted that "Berry not only liked country music but knew about as many songs as he did," per wikipedia. 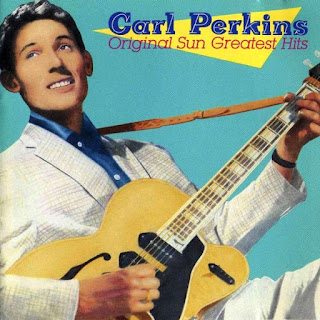 It's interesting to note the natural process of musical integration taking place at the roots level. Picture Bill Haley and the Saddlemen in cowboy gear playing the occasional rhythm and blues song to redneck audiences-- by some accounts, being occasionally booed-- and Chuck Berry playing occasional country songs in front of black audiences, who were also at first hesitant, then accepting. This is what being a pioneer in any field is about.

Among the white disc jockeys across America featuring black music was Dewey Phillips in Memphis. Many of the recordings he played came from the tiny Memphis storefront recording studio run by Sam Phillips (no relation), a southern talent scout for Leonard Chess. Sam Phillips recorded both white and black musicians, quickly starting his own label-- Sun Records.

Elvis Presley's first record for Sun, recorded on July 19, 1954-- ten months before Berry's-- was "That's All Right," backed with a country bluegrass tune, "Blue Moon of Kentucky." While the record received local airplay due to Dewey Phillips, it didn't chart. The only recording Presley made for Sun which made it onto the pop charts was "I Don't Care if the Sun Don't Shine," in 1955. It went to #74.

Not until Presley jumped to RCA at the end of 1955 would his career take off nationally. Why? Because RCA was one of the bigs and was able to give his recordings for them-- "Heartbreak Hotel" in January 1956 first among them-- better promotion and distribution.

One area where whitewashing of a sort did take place was in the movies. The 1957 Elvis movie, "Jailhouse Rock," in at least a couple of its particulars better matched the life of Chuck Berry than of Elvis. 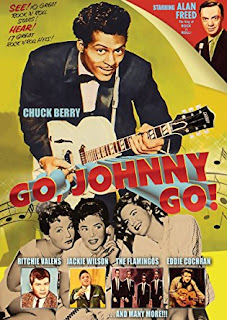 Why did Elvis Presley, and not one of the other rock pioneers, become a monster national phenomenon? Why not Chuck Berry, Little Richard, Fats Domino on the black side, or Bill Haley, Carl Perkins, Gene Vincent, or even Pat Boone on the white side?

Part of the reason was race, no question. It's unlikely this would have happened if Presley were black. But another reason was that Presley was able not only to synthesize the various roots music strains into his style, but to add to the mix a more "pop," mainstream, crooner aspect as well. A touch of Bing Crosby or Dean Martin. (Pat Boone did this, but couldn't get the rest of it down.) 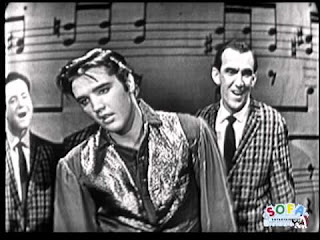 Undeniable as well was the fact of Presley's youth, looks, and charisma. What happened was that, like the fine-tuned universe, every aspect of the Elvis presentation, by intent or accident, was calibrated to create pop hysteria. He was outrageous-- but not as outrageous as Little Richard. (Though Elvis also wore mascara at some of his shows, perhaps an appropriation of the Little Richard act, though at this stage no one really knows.)

Promotion is never easy. The promoter-- especially when operating at a lower or working class level, like carny barker Colonel Tom Parker, the man with the big cigar-- is continually looking for just the right performer, or right mix, to punch a hole through the general, tops-down dominated culture. When Parker spotted Elvis he threw over his current act, bland country singer Eddy Arnold, for the more exciting and new.
*******

NEXT: In Part One I'll tie the argument together-- I'll make the basic argument-- and examine the difference between the populist and elitist viewpoints applied to American culture.