All About "Hound Dog"

THE FULL STORY? (Third of Three Parts. Other Parts to Be Written.) 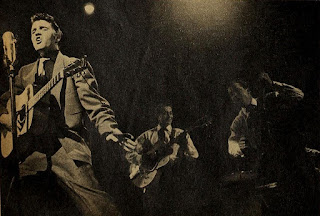 There's been much talk about cultural appropriation, including in this article by Current Affairs writer Briahna Joy Gray. The target (as in Alice Walker's much taught short story "Nineteen Fifty-Five") is Elvis's recording of the song "Hound Dog." Are the criticisms of Elvis valid? Or are they distorted?

The notable thing about the two versions musically is they're from similar but different genres. The Thornton version is clearly rhythm and blues. A blues song with rhythm backing. The Presley version is what rhythm and blues morphed into-- rock n' roll. Faster, less bluesy, with hard backing; drums, lead guitar, bass. The driving Bill Black bass and Scotty Moore guitar breaks are what give the song much of its energy. For all of Elvis's vocal chops, he's along for the ride.

The different pace and different vocal style are what country added to rhythm and blues as the two genres melded their styles to create a new synthesis which captured the planet. Though saying that is even a simplification-- Elvis's biggest idol as a vocalist was Italian-American crooner Dean Martin.

The first question raised: Why "Hound Dog"? Why is this song, of Elvis Presley's vast repertoire, used as the example of cultural appropriation? At the time, Presley was appropriating everybody. He was very eclectic, fan of every possible musical style, which made him unique.

Was "Hound Dog" his signature tune? Maybe-- he performed it often. It was part of his biggest-selling single, but people forget that "Hound Dog" was backed with the even more popular "Don't Be Cruel."

At the time, Elvis was more identified with another appropriation, "Blue Suede Shoes."

Note the hillbilly twang to the vocal.

The Presley version is faster, less countrified. It's rock.

The answer is: Not Very.

"Hound Dog" was written by Mike Stoller and Jerry Leiber, two Jewish teenagers from Los Angeles who loved rhythm and blues and wanted to make it in the songwriting business. They saw the genre as a quick avenue. How much authenticity of the black experience could two young white guys from California really bring to the game? In a sense, the song was an appropriation from the beginning. At some point, worrying about "appropriation" begins to be hair-splitting.

Many Leiber-Stoller songs were obviously tongue-in-cheek. For instance, "Charlie Brown" and "Yakety Yak," both recorded by the Coasters. One of their biggest hits, "Black Denim Trousers and Motorcycle Boots," recorded by the white vocal group the Cheers, was an outright parody of motorcycle gang movies:

A novelty record, of the kind George Martin was producing for EMI records in England. In a sense, all of the musical subculture of the time were considered novelties. Dismissed by intellectuals and critics in New York City, which then as now dominated the cultural scene. Many of the singers themselves, such as Big Mama Thornton, no doubt took their art seriously-- but not the established arbiters of culture, art, and taste, whose main focus was still classical and Broadway (think Leonard Bernstein). They had recently warmed to jazz.

This scene from the 1957 Elvis movie "Jailhouse Rock" encapsulates the divide:

As does this trailer for the cheezy 1956 movie "The Girl Can't Help It," which was loaded with every rock n' roll act the producers could find. Rhythm and blues to rockabilly, the acts were eager to cash in on what everyone considered a not-to-last fad.

What happened was that America's musical subcultures burst forth from underground, gaining popularity by their very crudeness, directness, and simplicity.

The most infamous performance of "Hound Dog" was on the Milton Berle Show in 1956. The honky-tonk show was burlesque in more ways than one:

Here's where the hypocrisy of today's Harvard-educated intellectuals comes in. They're happy to celebrate a chiefly-spent, roots-spawned musical force which came from America's lower classes, black and white. At the same time they pay no attention to underground forces in their own realm of writing and literature. No subcultures which could bring energy to a moribund scene allowed there!

They worry that Chuck Berry was banned from the radio airwaves in the 1950's. (He wasn't.) But care not a whit for banned or blackballed writers from now. A subject I know about, as I was part of a project to spotlight underground "roots" literary culture as a member of the Underground Literary Alliance. The writers we promoted included zine/roots luminaries from transgender star Urban Hermitt to Texas outlaw writer Wild Bill Blackolive.

As current editor of New Pop Lit I still feature or review the occasional authentic underground lit star, whether long-time zinester "fishspit" or e-book pop writer "Kitty Glitter." Their art is a tad rougher than anything taught at Harvard or published by the Big Five-- but, for good or bad, it's the genuine article. The sound of America now.
*********

NEXT: "Cultural Appropriation: The Harvard Viewpoint."