Jonathan Franzen: Voice of the Establishment? 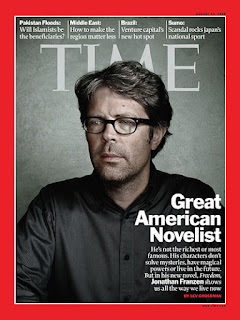 CURRENT NEWS in the Big Four publishing world is that Jonathan Franzen has a new 592-page novel coming out, Crossroads. To me, Franzen represents the voice and ideals of today's upper-caste establishment, in the same way James Gould Cozzens and John P. Marquand represented that voice in their time. With Franzen we get inferior Cozzens-- By Love Possessed-- and not a Guard of Honor.

The factor which caused Cozzens to write a significant novel-- despite his blinkered views on life and the world-- and not just another novel of manners, was his involvement in the Second World War, which placed him at the center of a massive and quickly-growing bureaucracy, the U.S. Army Air Force. He was able to put his strong observational talents to work observing and learning the workings of a gigantic organizational machine, along with the strengths and weaknesses of the too-human individuals who ran and populated that machine. Out of it came one of the most important of all American novels-- important because it caught America at a moment of vast change: transformation from isolated backwater to global empire. Any person in decades and centuries to come wishing to understand that nascent giant can do no better than to read Guard of Honor.

It's Jonathan Franzen's misfortune that he's been involved in no epochal, life-changing event, and hasn't challenged himself-- has failed to push himself into the world much beyond his limited upper-east side Manhattan horizons, and so has nothing to write about except the same recycled family scenes, stuffy and uninteresting (to this commentator anyway), which appeared in The Corrections, and apparently are in the new book as well.