AFTER a twitter exchange with a defender of Current Affairs magazine, I agreed to look at essays by one of their lead writers, Briahna Joy Gray, to see if they represented a tops-down, Harvard-oriented viewpoint. I selected her 9/6/2017 essay, "The Question of Cultural Appropriation." Rock and roll music has always been an interest of mine. From my earliest memories, I grew up listening to scratchy 45 rpm recordings by Chuck Berry, Elvis Presley, Fats Domino, Buddy Holly, Del Shannon, and other early rock luminaries.

THE QUESTION isn't whether Briahna Joy Gray's article makes sense, and speaks some truth. The question is the viewpoint. Or: Does the essay give the full story, or only part of the story? It's looking at a mountain from one angle and thinking you understand it. But we live in a three-dimensional world.

I've covered Gray's chief example of cultural appropriation in a separate blog post, "All About 'Hound Dog.'" The one point I didn't bring up there was that Big Mama Thornton's recording sold 500,000 copies across America, to consumers black and white. For a small record company, Peacock Records, this was an astounding achievement. The record could've sold more if promoted by one of the major record companies. Elvis Presley faced a similar, or worse, situation in the early days of his career, in 1954 and 1955 when recording with a tiny but ambitious outfit, Sun Records. Not until he hired Tom Parker as manager, and his contract sold to one of the majors, RCA, did his career become a phenomenon. 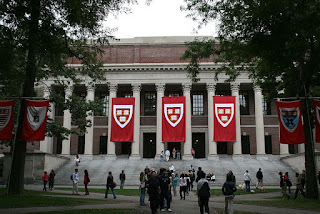 The Harvard Viewpoint sees the world in simplistic terms-- the terms of neo-Marxist ideology. The caricatured lens of a Howard Zinn-style history. Tops-down in view and one-sided.

In this view, America's economy is a static, stratified thing, rigidly in place, with inflexible hierarchies based primarily on race. No understanding that this complex dynamo is in constant flux, absorbing influences and undergoing continual change.

To the Harvard-based-or-educated commentator-- the staff of Current Affairs, say-- there's the Music Industry. Run by plutocrats and highly placed. The Industry decreed that black performers were to be shut out. (Countless counter-examples from Duke Ellington to Ella Fitzgerald and Nat King Cole need not be considered, as they don't fit the narrative.)

Under the Harvard Viewpoint, black musicians and white musicians were separate entities, with strictly separate musical styles. There's enough truth to this to make Briahna Joy Gray's essay believable. When performers like Chuck Berry invented rock music (and he did help invent it), the Industry needed a white face to slap onto the genre-- and lo!, Elvis Presley was plucked from obscurity, through no effort of his own, to become the acceptable face. Thereby benefiting immensely.

This is the impression given by the Current Affairs essay.

In 1955, when rock music exploded onto the larger cultural scene, the industry was something of a monolith, dominated by the "Big Four" of RCA, Capitol, Decca, and Columbia. (Similar to the "Big Five" publishing conglomerates of now.) At the same time there was enormous musical excitement on the margins of the industry.

Roots music from the poorest segments of American society had been creeping into public consciousness at least since the 1930's, from the folk music trio the Carter Family, sprung from the wilds of Virginia, to seminal blues guitarist Robert Johnson in Mississippi. 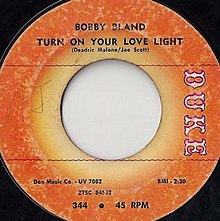 At about the same time, 1950, Leonard Chess and his brother Phil started Chess Records in Chicago. (Leonard's original name was Lejzor Czyz. "Chess" was an appropriation.) In 1951, Chess Records released what many consider to be the first rock n roll record, "Rocket 88," performed by the Ike Turner band, though the record was credited to the vocalist, Jackie Brenston. Another appropriation? 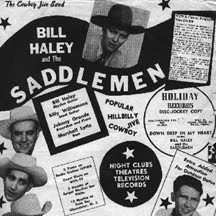 In the same year, a low-rent country-western band, Bill Haley and the Saddlemen, recorded a cover of "Rocket 88." An appropriation. Haley, one of the top cowboy yodelers of the 1940's, had become increasingly interested in rhythm and blues, though his previous recordings had been of songs like "Ten Gallon Stetson." In 1952, he dropped the cowboy hats and changed the name of his band to The Comets. 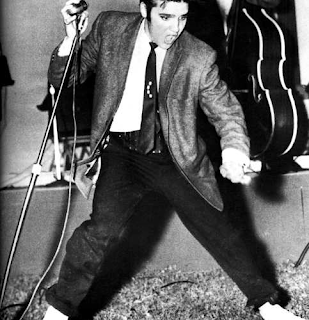 The populist narrative views American culture as not imposed from on high by conglomerates, nor by Harvard-trained culturati in Cambridge. Populism means genuine culture springing from a land and its people.

In this narrative poor whites and blacks in the South were experimenting with a variety of musical styles-- extensions of their original homelands; whether folk traditions in Scotland, England, and Ireland, or folk traditions in Africa. With the invention of the phonograph and the rise of radio, increased mixing of styles took place. Cultural integration. Integration that had been happening anyway. Technology increased its pace. As a teenager, Elvis Presley watched B.B. King playing on Memphis streetcorners, but he also listened to the radio.

Culture-mixing wasn't a one-way street, and the exchange was more horizontal than many believe. One of the few commentators to cover the topic has been Thomas Sowell, courtesy of a controversial essay, "Black Rednecks and White Liberals," in a provocative book of the same name. 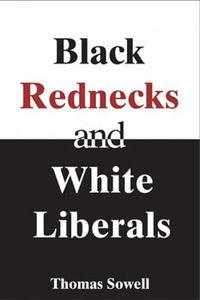 Neither rhythm and blues nor country and western music were mainstream or pop enough to capture middle-class America's full attention. Only when performers like Bill Haley, Chuck Berry, and Elvis Presley synthesized influences and added a pop sensibility did rock n roll move on from its stray beginnings to become a truly separate entity. The result was a cultural earthquake.

More than a musical revolution, though, it was a business upheaval. Do-It-Yourself versus Monopoly. At the dawn of the rock era, the Big Four, along with mid-majors Mercury and MGM, controlled close to 90% of the record-selling market. Within a few years they lost nearly half their market share to many hundreds of new record labels. Unprecedented business change. This was with RCA buying Presley's contract from Sun Records.

The reaction came in 1960 when Congress, prodded by big business, held "payola" hearings in Washington designed to reign in free booting music tycoons. Alan Freed was destroyed. Dick Clark, more cooperative, later claimed he was forced to dissolve 200 corporations in one day. The two disc jockeys had owned or controlled hundreds of new labels. 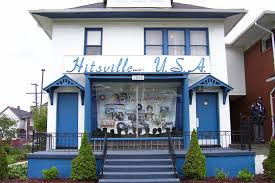 Yet sharp Do-It-Yourselfers able to spot talent continued the wave. Prominent among them was Berry Gordy Jr. in Detroit, who founded Motown (first called Tamla) Records in 1959 with $600 borrowed from his sister. Gordy created another synthesis-- well-produced and structured rhythm and blues with a pop style-- "The Sound of Young America." Gordy deliberately sought to appeal to a very broad audience-- and succeeded, turning his upstart enterprise into a billion dollar empire.

In the real world, as opposed to Marxist-leaning textbooks, this is how change is made. By hustlers, of any color. Wannabe capitalist tycoons with over-the-top dreams. In changing the business-- and making money as a by-product-- they also went a long way toward integrating and changing American society.
****

(Be sure to read the rest of this analysis, "All About Chuck Berry" and "All About 'Hound Dog.'"

We just lost one of our heroes. And a great music lover. And a giant of a writer.

He had the nerve to develop at least 6 new forms of literature.

He was the Beet Poet.

You may have known him as Art Brew.

He was America's best unpublished or underpublished writer for about 50 years and possibly 500 books. You can google him. His work is out there. His like will not be seen again. Rare, like the coelacanth.

He could cook, was an old-school archeologist for a time, and he knew music, movies and literature.

He was a class act. A hero of the underground and Mail Art and ye olde ULA. ...A true Evil Genius.

He withdrew from the limelight several years ago and passed away last night after a short time in hospice.

He lasted well into his 70's and is survived by a good-humored spouse, 2 musician boys, 3 grandkids and a community.

As you can see, I rarely anymore have time to check this blog!