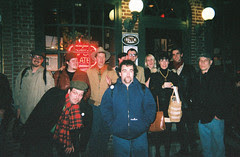 1wencla-R2-016-6A
Originally uploaded by King Wenclas.
Merry Christmas to All Friends, Fans, and Foes! I'm using a photo from an "East Coast Conclave" held last February for Philly area underground/zeen writers (at which a few heartland people also dropped in). Pictured is the entertaining Frank Walsh ducking up front. Arrayed elsewhere are ULAers Michael Jackman, Patrick King, Jeff Potter, Emerson Dameron, along with local poet Mike Grover as well as a NYC journalist whose name I can't recall. Also among the bunch and certainly not least among them is Lisa Carver, one of the top two or three zeen writers of the 90s, who was our Guest of Honor. (Not pictured are others who were there like Joe Smith, Fran McMillian, George Balgobin and his poet girlfriend Sarah, Victor Thompson, Bob Sheairs, Jackie Corley, Will Ratblood, Bonnie MacAllister, and others.)

Your well-seasoned blog host is on the right of the photo. This is my ULA Christmas card for this year.
Posted by King Wenclas at 7:32 AM

Merry Christmas, Karl! I'm sorry I missed the enclave in February (my wife's dad died just two days before--we had to cancel our hotel in Philly and fly to Chicago instead.)

Stay healthy and happy and hopefully we'll see each other soon!